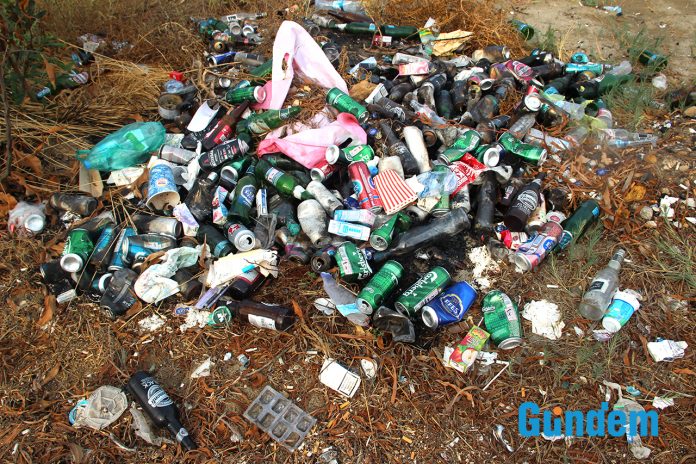 Cyprus is a beautiful island surrounded by the mediterranean sea, occupied by exotic beaches and lovely sea animals, but sadly there is a serious issue that has for a while, plagued the Northern part of the island. Thankfully, measures are being taken to ease the burden of this issue.

Recently, Gündem newspaper embarked on a series of interviews with local authorities and experts on environmental management to discover the exact causes of waste issues and the steps being taken by the government and various organizations in tackling the menace. In order to address the problem of waste, one must first understand the causes and types of waste that are most common in Cyprus. The Environmental Literacy Council, thus clarifies that “waste occurs when an organism returns substances to the environment; it is a natural part of the life cycle. Living things take in raw materials and excrete wastes that are recycled by other living organ­isms. However, humans produce an additional flow of material residues that would overload the capacity of natural recy­cling processes, so these wastes must be managed in order to reduce their effect on our aesthetics, health, or the environment.” This explains how human beings produce more waste than necessary, which affect the environment negatively.

Gündem newspaper conducted an exclusive interview with Cemile Kocareis, a Project Officer with the Famagusta Walled City Association (MASDER) who explained that MASDER is a non-governmental organization that focuses on the clean costs of marine litter, they also have some partners such as “the diving association from TRNC” and others who assist in ensuring this project is a success. They perform activities such as beach cleaning, visiting schools to educate students on the plastic and marine litters and its effect on marine life and the ecosystem and how we as human beings can help prevent this waste. MASDER has also created some animation videos and competitions with different schools in a bid to motivate students to learn about waste. “Although it is true that there are very few recycling companies in Cyprus, we can start small in our homes by dividing paper and plastics into different bags, doing this would be a good step in encouraging others to separate their waste too. The minute waste leaves our houses most of us forget about it and don’t care about how it would affect the environment, marine life or other generations to come, but the truth is that this causes a lot of damage to our world and it is a really big problem to the marine life, which in turn affects human beings.” When waste enters the sea, fishes and sea animals and most commonly in Cyprus “Caretta Carettas” grab unto it, assuming it is food and consume this toxic waste. Their food sacs at the end of the day are filled up with plastics and they cannot feed themselves and they eventually die of hunger. We as humans then consume these sea animals with toxic waste or poisons from the chemicals in their belly and end up poisoning ourselves in return. Seagulls are also affected by this issue, they dive to catch fishes and end up collecting plastic waste floating on the surface. They also feed what they catch to their babies. It is important to realize how this waste affects our lives and the lives of other generations to come. Throwing a bottle out of your car or leaving food packs on the street are all forms of waste. We should try our best to abstain from these acts.

In her final remarks, Cemile Kocareis stated that in the past when she was younger, people were eager to clean up after themselves and would clean their streets by themselves, but now it is a lot worse. People are waiting for the municipality to clean and collect the waste from not only their streets but at their doorsteps. Nowadays, people no longer care about the cleanliness of the environment, but the truth is that nature is all of our jobs, when we don’t work to save our nature, we as human beings would suffer the consequences.

In a related interview, Dr. Burak Ali Cicek, an Assistant Professor of biological science at Eastern Mediterranean University who also runs a consultancy firm that deals with marine environment-related issues like sea turtles, whales and all other organisms in the sea, offered some insight into waste management issue in Cyprus. According to him, Cyprus is a very small island, so it receives the majority of its goods from other countries like Turkey, the United Kingdom, and the United States. He emphasized that in larger countries there is a lot of waste but there are also a number of recycling companies, which is sadly not the case for Cyprus. Cyprus is a tiny island but there are almost no recycling facilities. The waste in Cyprus has no value compared to the waste in other larger countries, where people collect waste and sell them or exchange them for other raw materials. But in Cyprus, the waste just piles on and as a result, most of the waste gets to the sea and creates marine pollution. Another issue is that in the coastal zone, there are other wastes such as plastic wastes coming in from other countries like Egypt, Saudi Arabia that directly dispose of their waste into the sea. These countries most times don’t have enough money to transport the waste to recycling companies, so they collect their wastes from the cities and directly dispose of them into the sea. The currents in the sea then carry these waste products into Cyprus. This is the second source of pollution in Cyprus, but the first source of pollution is us, the citizens of Cyprus. This pollution which extends to the beaches is not good for tourism and for human beings living in Cyprus. It is also bad for biodiversity, especially the seat turtles that consume jellyfish, which are very similar to nylon packages and as they consume this waste, it then kills them.

Dr. Burak also explained that the price placed on plastic bags in most grocery stores was a ploy from Turkey to discourage those living in Cyprus from the buying and improper disposal of plastic bags. Instead, to encourage the use of shopping bags made from other materials. According to him, it seems that more people are now using non-plastic bags, but there is no statistic yet to back this claim. It was also a way to raise awareness among those living in Cyprus about the effect of plastic waste disposal on the environment. However, Dr. Burak explained further that Cyprus is working to combat these issues by working first of all on the beaches, students volunteer to protect the nests of sea turtles and then patrol the beaches daily. Creating awareness on this issue is very important, and as intellectuals in the university, we should abstain from throwing waste products on the streets. The Faculty of Communication should also continue to create awareness about the negative effects of waste products on the environment, Dr. Burak concluded.

Waste management is not an issue that should be ignored, but one that all hands including students and natives alike must be on deck to work on resolving.

On the 25th November, The International Day for the Elimination Violence against Women