Chimene Suleyman, an inspiring writer originally Turkish Cypriot, born and raised in London, was hosted to a seminar organized by the New Media and Journalism Department of Eastern Mediterranean University last Monday, December 16, 2019.

Discussions at the seminar were drawn from the book, The Good Immigrant, both the UK and USA edition which revolved around issues regarding immigration, race, and identity. With contributions from 21 different authors including Chimene Suleyman, the UK edition of The Good Immigrant is a collection of essays written by a group of people who shared their experiences about what it means to be a “good immigrant”. The Good Immigrant was written at a time when the publishing sector in London took a unidirectional narrative to such issues as immigrants’ identity, and if at all books were written by people of color, it was nonetheless centered around the same mainstream narrative about immigrants. The USA edition in which Suleyman is co-editor, makes up essays from 26 different writers.

Expressing her displeasure about the state of the publishing world at that time, Suleyman explained how postcolonial publishing was incredibly restricted when it comes to writing about people of color, they were given the usual cliché narrative, forcing people of color to remain inside the tiny box publishers considered “appropriate”. According to her, publishers insisted that people of color were not buying the books, but Suleyman stated that she believes, it was because they didn’t see themselves reflected in the stories crafted by writers, and that is what The Good Immigrant aimed at changing. Publishing The Good Immigrant became necessary to show the world that there was more to life than the white narrative which paints immigrants as gang members, job stealers, terrorists, poverty-stricken individuals, and so on. The book provides a way to give marginalized communities a chance to speak for themselves and not be spoken for, it was a way to give people of color the missing third dimension. 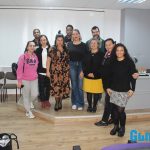 Suleyman was particularly excited about the fact that some of the essays contradicted each other, she explained how important it was to show to the world that immigrants and people of color do not represent each other, they are allowed to be different and to disagree. “The Good Immigrant was an entirely sarcastic title,” as it explains how as an immigrant you automatically start from a position of being considered bad, looked upon with suspicion and automatically considered a bad immigrant. The biggest challenge before us, you then have to prove yourself to be a good immigrant, you literally have to strive to possess the unrealistic qualities of superhuman; winning a competition or winning a medal. Being “a good immigrant” by achieving these things is almost impossible.

However, the book was crowned Britain’s book of 2016, it got people thinking and there was a sort of shift in the immigrant narrative in the UK. After parts of her essay from the two editions of the book, with the fascinating, “you cannot have meaning without knowledge of the environment it stems” Suleyman opened the flow for interaction with the audience who also shared their experiences about some of the issued discussed. Chimene Suleyman concluded that assimilation should be two-sided, the immigrant should not only be asked to assimilate but also the host community as well.

Before the seminar, Suleyman visited the Rector’s office and was presented a plague by Prof. Dr. Necdet Osam. At the end of the session, she was also presented a plague as an appreciation for sharing her thoughts with the staff and students of the Department of New Media and Journalism and the Faculty of Communication and Media Studies at large.

Let’s “SAY NO” to Violence Against Women